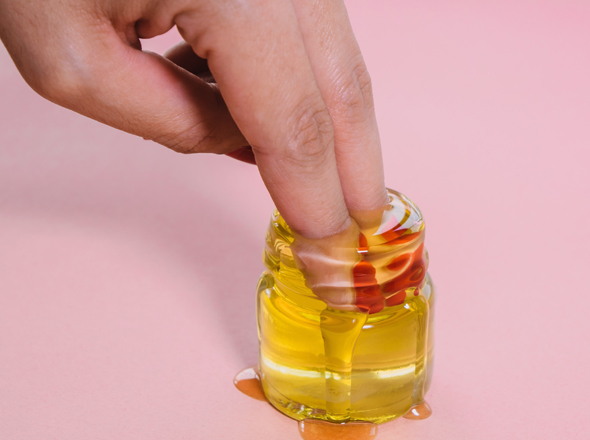 In order to stop spoilage and to extend shelf life, manufacturers claim that nutrients have to be removed -- which causes flavor to be lost as well. All the natural substances that help digest and metabolize the oils are removed, including: phospholipids (including lecithin); phytosterols (which block cholesterol absorption from the intestines); Vitamin E, carotene and their precursors (which protect oils against damage in storage by their antioxidant properties); chlorophyll (which is rich in magnesium); aromatic and volatile compounds; and minerals.

During the processing of oils, natural compounds are altered by heat and chemicals, causing the nutrients to be either converted or removed. Conversion to detrimental substances include trans fatty acids, polymers, cyclic compounds, aldehydes, ketones, epoxides, hydroperoxides, and other compounds not yet identified. Many of these substances are toxic, even in small quantities.

The following are the steps taken to process oils found on supermarket shelves.

The industry's rationale for the degumming process is as follows:

"Cold pressed" is a term used to describe oils that have been mechanically pressed slowly so that temperatures do not rise above 140°F -- technically speaking. However, it is actually a term searching for a meaning since there are no firm regulations regarding it. Manufacturers claim that if no external heat is applied, the oil qualifies as "cold-pressed," yet these oils can be processed by the same methods as supermarket oils. As seen in the processing method, "cold-pressed" is not an accurate depiction of reality since temperatures can reach well above the minimum "standard" without "external" heat being applied. Machines heat up during mechanical pressing. In Switzerland, cold pressed is defined as those oils which have not exceeded temperatures of 50°C (122°F) from seed to bottle. In North America, there is no such specification. Oils sold as "cold pressed" can be labelled as "unrefined," "unprocessed," "expeller-pressed," etc., and sold in dark containers just like cold-pressed oils that have maintained high quality standards. The secret is in knowing the source and how they produce their oil. A terms to watch for here is "completely protected from light and air during processing" because essential fatty acids absorb sunlight increasing their ability to react with oxygen more than 1000 times opening the door for them to spoil faster, causing free radicals.

Cold pressed oils are more intense in taste and color than refined oils, containing 25-50% more Vitamin E, 45% more beta-sitosterols, and significantly lower levels of trans-fatty acids than refined oils. Unrefining also preserves the essential fatty acids. These oils are usually made from organic seeds since non-organic seeds contain high levels of pesticide residues, which are only partially removed from refined oils The reliable cold-pressed oils are usually sold in health food stores and are to be kept refrigerated.

According to Udo Erasmus, the ideal oil produced should have these steps in mind:

Labelling trans fatty acids is a nightmare, varying from country to country. In the US, trans fatty acids are lumped together with monosaturated fats with no differentiating between the health-supporting group and the damaging group. Since monosaturated fats are considered a healthy choice, consumers are unaware that they are consuming harmful trans fats along with the healthy monosaturated ones. Trans fatty acids are largely a product of commercial processing called "hydrogenation." This type of fatty acid raises total cholesterol including LDL ("bad" cholesterol) while reducing HDL ("good" cholesterol). This is particularly noted in the French, who consume just as much of the saturated fats as North Americans, but use butter, olive oil, and other vegetable oils for cooking, whereas the majority of the North American diet consists of other types of harmful fats.